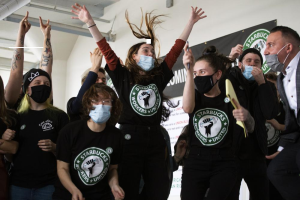 Buoyed by the victory of a newly organized union at one Starbucks store in Buffalo to gain collective bargaining rights, and in the face of intense anti-union pressure from the company, Starbucks workers at other facilities are also talking union.

Workers at a second store in the Buffalo area won union rights after the National Labor Relations Board (NLRB) certified their election.

And in mid-January, the NLRB ordered elections at three more stores in the Buffalo area, the Buffalo News reported. But just as significantly, Starbucks workers at over a dozen stores in eight states have since have begun to fight back against their poor pay and working conditions. They’ve gone public, calling for recognition as the bargaining agent for its workers and filing petitions for their own union elections.

Along the way, Starbucks has launched an aggressive anti-union campaign, hiring notorious management-side law firm Littler Mendelson to represent the company before the NLRB. In the latest bid to compete as champ union buster, The New York Times reported February 9 that a Starbucks in Memphis, Tennessee, had fired seven union activists over alleged violations of company policy. The seven worked at one of the several dozen stores that had filed for union representation elections with the NLRB. The workers and the union trying to organize the store charged that they were fired for their union activities and have appealed the firing to the NLRB.