What a difference a good strong union makes. Particularly a progressive one that always keeps the needs of its rank-and-file members as its number-one priority. 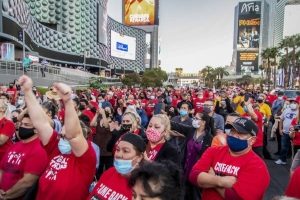 Hospitality workers line the Las Vegas Strip for the Culinary Union’s “We Will Come Back Stronger” rally in October.
Photo courtesy Culinary Union

A most recent example of that difference is the work of the 60,000 member Culinary Workers Union in Las Vegas, Nevada, representing the city’s workers in the hotels and casinos. It is an affiliate of the 300,000 member national union Unite Here. The majority of the Las Vegas union workers are Latino women and men who do the housekeeping work and the cooks and kitchen workers, all of whom essentially keep the hotels running. Its secretary-treasurer, Geoconda Arguello-Kline, came to the United States from Nicaragua in the 1980’s and worked in the hotels, subsequently joining the union, becoming a union activist, organizer and officer. She has led strikes against the powerful hotels and casinos on the Vegas strip, marched with Cesar Chavez on a picket line, and has negotiated contracts that are now part of the industry. Normally workers in the hospitality and hotel industry are among the lowest paid with the fewest benefits. But the union’s successful organizing and fighting for its members – one that spans decades – have made an enormous difference in the lives of these workers.

And nowhere has this has come into focus more sharply than in the in the union’s role in helping its workers survive the Covid epidemic crisis. A must-read article by Hamilton Nolan in the January, 2022, issue of the magazine In These Times, details the role of the union in its life-saving work when 98% of its members found themselves unemployed by the prolonged shutdown of the hotels and casinos, the city’s major industry.

Over the years, the Culinary union has not only been a just an ordinary union fighting for wages and benefits but, according to the In These Times article, “a full-service social service agency and political operation with unparalleled efficiency in using labor power to create sustainable middle-class lives for workers who would otherwise face low wages and indifferent prospects.”

With the shutdown of the casinos and the unemployment of practically all its members (and the subsequent loss of its income without membership dues) the union’s care for its members met the hardships head-on and helped them to sustain themselves.

Even with its finances in peril “it launched a free food distribution program that has, to date, given out more than 475,000 baskets of food to members: beans, rice, chicken, fruit. At the program’s peak, 1,800 people were coming to pick up food each day.” It also began a major campaign to help workers file for unemployment benefits, launching online assistance to help them cut through the complex process laid out in the “creaky” state-run website.

Another great concern of laid-off workers,  particularly in the midst of a pandemic, is the loss of health care. But this union had long fought for and gotten its own employer-funded but union-run health care system, that provided particularly fine coverage for its members. With employer funding now cut off, the union, nevertheless, guaranteed that its workers and their families, about 180,000 people, would keep their coverage for 18 months. What a relief for Culinary Workers members to know that they would not lose their coverage, particularly since some 1,500 of them or their family members have been hospitalized with the Covid virus. The union also conducted a campaign to get its members vaccinated, running virtual town halls featuring doctors to counteract the anti-vaccine propaganda dished out by Fox News and other right-wing media.

In the middle of all this, and perhaps because more workers saw the benefits that it provides, the union continued to organize, winning unionization at two major facilities and adding 3,400 new members to its rolls.

A Major Political Player in Nevada

A major part of its success has been the political role it plays in the politics of Nevada. Its endorsement has been sought by every major Democratic presidential, congressional and state office contender, all of whom know that this is an organization that can deliver votes. And they also know that they’d better deliver for workers in turn. During the 2020 campaign, its members knocked on thousands of doors and resulted, in large measure, for delivering the state to Joe Biden and for the victory of its two Democratic senators. The union has also been something of a training ground for office holders. In the Nevada State Assembly, the chair of its powerful Ways and Means Committee, Maggie Carlton, was the Culinary Union shop steward in one of the major hotels on the Vegas strip.

Its political clout was evident in the midst of the pandemic in getting the state legislature to pass a law guaranteeing that laid-off workers would return to their jobs when the hotels and casinos reopened. Although it was also part of the union-negotiated contracts, it wrote into law the guarantee that employers could not replace union workers with others at lower starting wages. Today, with the hotels and casinos starting to reopen, two-thirds of its members are back at their jobs.

In the Words of Its Members

The role that the union has played is best summed up in the words of its members. One of them, Shawn Best, was a casino worker in the Cosmopolitan on the strip. Unable to pay his rent, he lived in a hotel which he could not sustain for long. He called his union which put him in touch with  a non-profit organization that provided him with rental assistance. “Without the union, I would have been homeless,” he recalled. He is also a diabetic who needs regular insulin and spent some time in the hospital in 2020 with complications from the disease. Without the union’s health care, he would not have had the insulation he needed, and in his words, “I might have been dead.”

Another worker on the strip, a porter at The Strat who goes by one name, Rocha, can’t hide her love for the union. Since she joined, according to the In These Times article, “she’s received free training for a new job at the union-affiliated Culinary Academy; she took a leave of absence from work to help with union business, a benefit guaranteed by her contract; and she bought a house, with help from the union housing program that provides mortgage assistance and training for first-time homebuyers.”

She also got Covid and was out of work and in quarantine for four weeks. “It was really scary,” she says. “But having an organization like the union, that protects and fights for our rights, our protection, it makes you feel strong.” It’s wonderful to feel “I’m not alone.”

A footnote to the work of the Culinary Workers Union was the story from the AP wire, Nov. 30, when a three-judge panel of the 9th U.S. Circuit Court of Appeals upheld a lower court ruling ordering the Station Casinos’ Red Rock Casino to bargain with the culinary and bartenders unions.

The union had waged a long fight to unionize about 1,350 employees at the Las Vegas-based casino company that had refused to negotiate in good faith, a charge sustained by a National Labor Relations Board lawsuit against the company.

U.S. District Judge Gloria Navarro identified what she called a “landmark violation” of federal labor law in July when she issued her ruling backing the NLRB’s request for injunctive relief. She ordered the company not to threaten, discipline or interfere with employees because of their membership or support for the union.