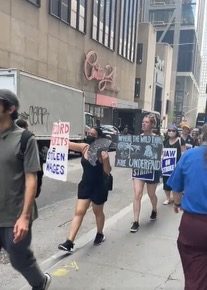 About 100 employees at HarperCollins publishers Manhattan office staged a one-day strike July 20, picketing for higher wages, better family leave policies, and stronger action to improve diversity in its staff. Negotiations with the company have been going on since the union contract expired Dec. 31 with little headway.

The HarperCollins workers are members oi Local 2110 of the UAW and it is the only union shop in the book publishing industry. The union represents employees in the editorial, sales, design, publicity, legal and marketing departments. Average starting salaries in the industry range at about $42,000 with average salaries topping out at $55.000 annually, not enough for professional people who live in a high-priced area like New York. The company, the union charges, can afford strong salary increases since it has recorded record breaking profits in recent years.

Another big issue is the demand to include the employees who became part of HarperCollins when it took over Houghton Mifflin last year in the bargaining unit and recognize their seniority.

In another development in the publishing industry Atlantic’s business and technology workers announced the formation of a union, calling themselves The Atlantic Union: Business & Technology. It is represented by The NewsGuild of New York.