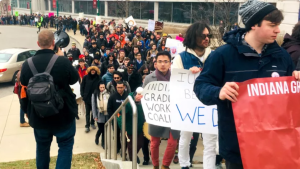 Graduate school workers at Indiana University went on strike April 13 demanding recognition of their union in the face of the university’s refusal to recognize it.

The walkout came after the union, the Indiana Graduate Workers Coalition, a unit of the United Electrical, Radio and Machine Workers (IGWC-UE) obtained a strike authorization vote by a margin of 1,008 to 23, or 97.8 percent of the ballots cast. The walkout is intended to demonstrate that the union has, in fact, the support of a majority of the 2,500 graduate workers and a majority who will participate in collective action.

They were joined on the picket line the first day by undergraduate students who walked out at noon in solidarity with the graduate workers. A number of faculty members also are backing their demand for recognition and bargaining rights.

Workers in the state of Indiana have few rights to organize unions in the private or public sectors since the state is one with the so-called “right-to-work” laws.

The UE has become one of the leading forces in the drive to organize these workers, recently organizing a large unit at MIT in Boston (see item on this website’s Labor News page)  and others in universities around the country. While UE has been doing this for a number of years, the number of grad workers in its membership has soared in the past year.