All Three Joint Councils of the Teamsters Union  in New York State have urged the state legislature to pass two laws aimed at protecting workers in warehouse industries like Amazon from some of the notorious corporate abuses they have suffered.

In letters to the legislature and in a rally and two press conferences at the Albany state capital, they urged the adoption of the Warehouse Worker Protection Act and the 21st Century Antitrust Act. The first would create a plan to reduce injuries at 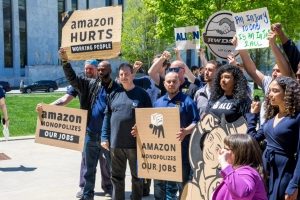 large warehouses that result from repetitive movements and unsafe practices, empowering  the state Department of Labor to enforce worker safety regulations more effectively. It also protects workers from firing or disciplinary measures based on secret or unfair production quotas.

The 21st Century Antitrust Act is intended to update New York’s antitrust laws to meet the growing concentration of some giant corporations in the state. As one example, the Teamster statement said, since Amazon opened its first facility eight years ago, it has expanded to 78 facilities statewide, a situation that is endangering workers, given its poor record on worker safety. The proposed act would lower the very high threshold that now exists for proving that a company has monopoly power over the labor market and empowers the state Attorney General to review potentially harmful consolidations and mergers that affect labor markets.

“Amazon has undercut good jobs by paying half the union rate and lengthening the workweek,” the Teamster letter declared. “When a company is this big, and it is non-union, then the employer can dictate wages and working conditions unilaterally for its own workers, and those bad conditions trickle down to the rest of the industry as well.”